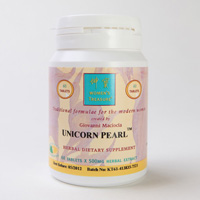 “Unicorn” in ancient China was a symbol of fertility. “Pearl” is a name for “formula” in the same way as Pill (wan or dan, e.g. Tian Wang Bu Xin Dan). However, the term “pearl” also refers to the preciousness of the formula as it tonifies Kidney-Yang.

Explanation
This formula is for Kidney-Yang and Kidney-Essence deficiency. Although the Kidney-Essence is fluid in nature and, as such, part of Yin, it does have a Yang and a Yin aspect. In fact, its Yang aspect is prenatal and comes into being at conception with the formation of the Minister Fire.

Unicorn Pearl™ is primarily for Essence deficiency in its Yang aspect. The emphasis of this formula is therefore, not on tonifying Kidney-Yang, but on nourishing the Yang aspect of the Essence.