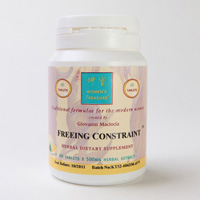 Provided there are clear signs of stagnation and the pulse is wiry on the whole, this formula can be used for long periods of time. Contraindicated in pregnancy.

In severe instance of Liver-Qi deficiency leads not only to unsettling of the Mind, but also to a slight obstruction of the Mind. This formula also harmonizes Liver and Stomach and is particularly suited for stagnant Liver-Qi invading the Stomach