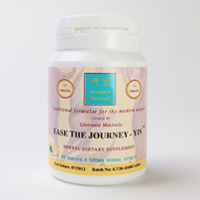 Tongue: This could range from a nearly normal-coloured body (tending to red) with rootless coating to a red body without any coating at all, depending on the degree of Yin deficiency.
Pulse: Floating-empty, or weak on both rear positions and relatively overflowing on both front ones, or fine and rapid if there is pronounced Empty­-Heat.

Ease the Journey – Yin® is aimed at addressing a deficiency of both Yin and Yang but with a predominance of Kidney-Yin deficiency.