A feeling of distension (zhang 胀) indicates stagnation of Qi. This type of sensation will be seldom referred to as ‘distension’ by Western patients: more often than not patients will call it a feeling of ‘bloating’, ‘bursting’, ‘being blown-up’, etc.

A feeling of distension is both subjective and objective. The patient feels bloated subjectively, and distension is also objective in that it can be seen and palpated. On palpation it feels like an over-inflated balloon, it resists on palpation and ‘rebounds’.

A feeling of oppression (men 闷 ) denotes Phlegm or also more severe stagnation of Qi. The translation of this term cannot adequately convey the image evoked by its Chinese character: this depicts a heart constrained by a door and, besides the physical sensation, it also implies certain mental anguish associated with this feeling. A Chinese patient who says he/she has men is probably depressed. Yu men 郁 闷 = depressed…Read more. 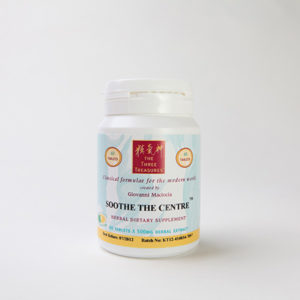 Pattern: Stomach-Qi and Spleen-Qi deficiency, Stomach-Yin deficiency, Dampness and stagnation of Qi in the Middle Burner. 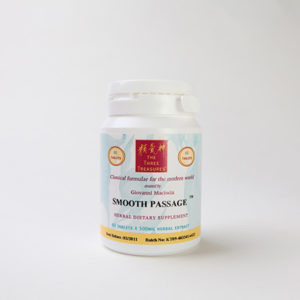 Smooth Passage™ differs from Break into a Smile™ and Soothe the Centre™ in that it is directed at the Lower Burner.