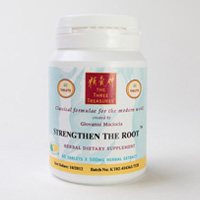 The “root” refers to Liver and Kidneys (see Nourish the Root and Invigorate the Root™). “Strengthen” refers to tonification of Yang: this formula tonifies Kidney-Yang (a variation of You Gui Wan Tonifying the Right [Kidney] Pill.

Tonify and warm Kidney-Yang, stoke up the Fire of Ming Men, fill the Jing, nourish Blood, strengthen the Will-Power.

Tongue: Pale, wet.
Pulse: Deep and weak, especially in the rear positions. It could also be slow.

Tonify Qi and the Yuan Qi with Ren Shen.

Explanation
Strengthen the Root™ is a variation of You Gui Wan (Restoring the Right [Kidney] Pill) which tonifies Kidney-Yang. This was chosen in preference to the “Golden Chest Kidney-Qi Pill” as it provides a broader therapeutic range by nourishing Blood (with Gou Qi Zi and Dang Gui) and by strengthening sinews and bones (with Du Zhong).

Ren Shen was added to tonify Qi and strengthen the Yuan Qi, and Zhi Mu to counterbalance the hot nature of most of the herbs. This condition is characterized not only by Kidney-Yang deficiency but also by Jing depletion. Kidney-Jing is the material basis for all the Kidney’s physiological activities. Jing has a Yin aspect and a Yang aspect; in this case, its Yang aspect is deficient.

Severe deficiency of Kidney-Yang implies a weakening of the Fire of Ming Men which, among its many functions, warms the Heart and assists its housing of the Mind (Shen).

From the channels’ perspective, a deficiency of the Fire of Ming Men implies a deficiency of the Governing Vessel (Du Mai) which originates from the space between the Kidneys where the Yuan Qi throbs, flowing through the heart and entering the brain. Thus, by linking Kidneys, Heart and Brain, it connects Jing, the Shen and the Brain, i.e. the three aspects of the Mind.

The formula has a hot energy and for a pattern of pronounced Yang deficiency, and secondly that there is not any Heat anywhere in the body. For example, it is quite possible to have Damp-Heat in the Bladder occurring against a background of Kidney-Yang deficiency. In such a case this formula should not be used, and one could consider either combining the formula with Ease the Journey – Yin®, or using Separate Clear and Turbid™ or Clear the Root™ for a few months followed by Strengthen the Root™ once all signs of Damp-Heat have gone.