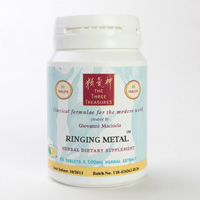 “Metal” refers to the Metal Element and therefore the Lungs. It is said in Chinese medicine that the Lungs are like a bell: it should be empty so that it rings (like a bell). If the Lungs are filled with Phlegm, it is like a bell that is not empty and that therefore does not ring. This formula eliminates Phlegm from the Lungs so that “Metal” (i.e. the Lungs) rings normally.

Tongue: Normal, red or red only in the front with a thick-sticky-yellow coating.
Pulse: Slippery, rapid.