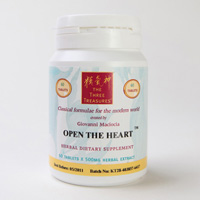 The “Heart” refers to the Shen and “opening” to eliminating stagnation. This formula is a variation of Ban Xia Hou Po Tang (Pinellia-Magnolia Decoction) which addresses stagnation from the Heart and Lungs.

Moves Qi in the chest, stimulates the descending of Lung-Qi and Heart-Qi, calms the Mind, settles the Corporeal Soul.

Explanation
Open the Heart™ is a variation of Ban Xia Hou Po Tang (Pinellia-Magnolia Decoction). The formula is often cited as one to move Liver-Qi when, in fact, it is really to deal with stagnation of Qi in the chest deriving not so much from the Liver as from the Lungs and Heart. However, as the Liver which controls the free flow of Qi, is also involved whenever Qi stagnates.