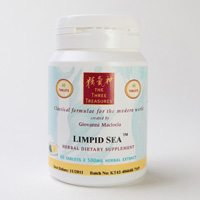 “Sea” here stands for the Body Fluids: they are “limpid” because they are free from Dampness or Phlegm which are turbid. This formula eliminates Dampness and Phlegm.

Phlegm (damp, cold or hot) in the Middle and Upper Burner.

Explanation
This formula is a variation of Er Chen Tang (Two Old Decoction) which is the classical formula to dry Dampness and resolve Phlegm. This formula can be used as a general formula to dry Dampness and resolve Phlegm in many different locations of the body and with many different manifestations. The original formula is the classical formula for the Damp-Phlegm variety of Phlegm, i.e. Phlegm combined with or deriving from Dampness. The formula has been modified to resolve also Hot-Phlegm and Cold-Phlegm. The latter differs from Damp-Phlegm in so far as there is more Cold present.

Phlegm may also manifest in other ways such as soft lumps under the skin: as Phlegm obstructs the Middle Burner it prevents the proper ascending and descending of Qi in the Centre.

It is important to understand that this formula addresses only the Manifestation, i.e. it resolves Phlegm and dries Dampness but it does not address the Root that is always Spleen-Qi or Spleen-Yang deficiency. For this reason, this formula can be combined with Soothe the Centre™ or Prosperous Earth™, as Limpid Sea™ will address the Manifestation and Soothe the Centre™ or Prosperous Earth™ the Root. Alternatively, these two formulae may be used together.

Acupuncturists could use this formula to address the Manifestation of Phlegm and acupuncture to address the Root by tonifying the Spleen with points such as ST-36 Zusanli, SP-3 Taibai, BL-20 Pishu and BL 21 Weishu.