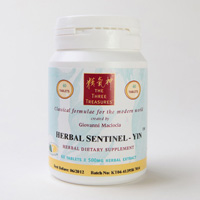 “Sentinel” is a guard that patrols a watch tower: it is a metaphor for the Wei Qi system that guards against invasions of external Wind. This formula protects the body from invasions of Wind in individuals who have a tendency to Yin deficiency.

Tongue: Red without coating or with rootless coating. It may be red only in the centre or front part. It may also be only slightly red with a rootless coating.
Pulse: Floating-empty or fine.

Explanation
This is a formula containing Lung-Qi and Spleen-Qi tonics such as Huang Qi to strengthen the Defensive-Qi and consolidate the Exterior.

Like the Herbal Sentinel – Yang™, this formula is designed to tonify Zheng Qi and strengthen the immune system. The present formula is for people with a deficiency of Yin and Qi of the Lungs, Spleen and Kidneys.

However, the formula is meant to be used as a preventive against invasion of external Wind. Thus it can also be used for those who do not have pronounced patterns of Yin deficiency of the above organs but simply a tendency or a constitutional propensity towards such deficiency. Provided the tongue lack a coating or has a rootless coating and the person has some slight symptoms of Yin deficiency, the formula is applicable.

Herbal Sentinel – Yin™ can also be used as a general protector of the immune system. In this case, its dosage should be increased during autumn and winter and decreased during spring and summer.

When to take
Take a higher dose in the evening.