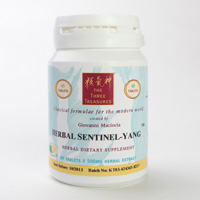 “Sentinel” is a guard that patrols a watch tower: it is a metaphor for the immune system (or Wei Qi system) that guards against invasions of external Wind. This formula protects the body from invasions of Wind.

Tongue: Pale or slightly pale.
Pulse: Generally weak or empty. It may be weak only on the right side.

Explanation
The two Herbal Sentinel formulae are designed to tonify the vital force. The present formula is for people with a deficiency of Yang of the Lungs, Spleen and Kidneys. However, this formula is meant to be used as a preventive against invasion of external Wind. Thus, it can also be used for those who do not have pronounced patterns of Yang deficiency of the above organs but simply a tendency or a constitutional propensity towards such deficiency.

Provided the tongue is pale and the person has some patterns of Yang deficiency, this formula is applicable.

This is a new formula but it contains elements of classic formulae such as Yu Ping Feng San (Jade Wind-Screen Powder) to tonify Lung-Qi and Defensive-Qi and consolidate the Exterior, and Gui Zhi Tang (Ramulus Cinnamomi Decoction) to harmonize Defensive- and Nutritive-Qi.

Besides Lung and Spleen tonics such as Ren Shen, the formula contains Kidney-Yang tonics such as Tu Si Zi, Du Zhong and Ba Ji Tian because Kidney-Yang is the foundation of Defensive-Qi and therefore of resistance to pathogenic factors. Huang Qin and Yu Zhu have been added to counterbalance the hot energy of the other herbs and protect the Yin from being injured by them.

When to take
Take a higher dose in the morning.