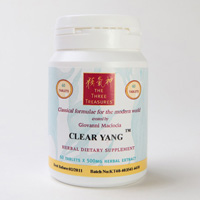 “Yang” here stands for Liver-Yang rising and Liver-Wind. Liver-Wind rises and carries Phlegm with it obstructing the upper orifices. “Clear Yang™” here refers to the pure Yang eliminating Phlegm in the head and also to the subduing of Yang and Liver-Wind.

It tonifies the Kidneys and nourishes Blood (which the original formula does not do), it opens the Mind’s orifices to resolve Phlegm from the brain.

Explanation
This formula is specifically to address a background of both Phlegm and Liver-Yang rising: this pattern is, in fact, probably the most common pattern encountered in middle-aged or old people. Phlegm, formed as a result of Spleen deficiency over a long time, clouds the head’s orifices and prevents the clear Yang from rising to the head to brighten its orifices.

Liver-Yang rising may also occur against a background of Kidney-Yang deficiency.

Mental-Emotional Pattern
Phlegm obstructs the head’s orifices and, on a mental level, it clouds the Mind. This type of person will talk in a hesitant manner and will be confused about his or her condition and about life in general.

When to take
After meals.