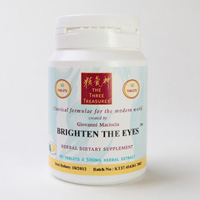 This name is self-evident: the formula addresses the eyes and specifically eye problems deriving from Liver-Blood deficiency.

Deficient Liver-Blood and Kidneys not nourishing the eyes.

Nourish Liver-Blood and the Kidneys, brighten the eyes.

Explanation
This is a formula based on the prescription Si Wu Tang (Four Substances Decoction) with the addition of herbs to nourish the Kidneys and brighten the eyes, such as Tu Si Zi, Gou Qi Zi and Nu Zhen Zi. This formula can be used where there is deficiency either of Kidney-Yang or of Kidney-Yin, which may be combined with Blood deficiency as explained below.

The formula is innovative in so far as it combines nourishing Blood with strengthening the Kidneys, although it is primarily for the former. Especially in women, there is very often an overlap between Blood deficiency and Kidney deficiency. This is because the Uterus (as an extra Fu organ) stores Blood and is functionally related to the Kidneys (through the Bao Mai, the channel that links the Uterus with the Kidneys, and through the extraordinary vessels Ren Mai and Chong Mai).

It can also be used as a general Blood tonic as it is based on the formula Si Wu Tang (Four Substances Decoction) with addition of other Blood tonics. As a Blood tonic, it is particularly suitable for women as it also nourishes the Kidneys.

When to take
Take after meals