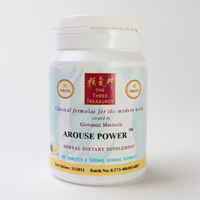 “Arouse power” refers to this formula’s tonification of the Kidneys.

Explanation
The sexual function in women and in men rely on the coordination and harmony between Kidneys and Heart. The Water of the Kidneys and the Fire of the Heart need to nourish each other. While the Kidney-Essence is the origin of sperm and menstrual blood/ova in women, the Heart plays an important role in erection and ejaculation, the release of eggs for ovulation and the discharge of blood during menstruation.

Thus, while the Kidneys are the source of Yin and Yang in the sexual and menstrual function, the Heart promotes the transformation of Yin into Yang and vice versa during the menstrual cycle; it also promotes the discharge of menstrual blood at menstruation, eggs at ovulation and sperm during ejaculation. In particular, in men, the Heart plays a crucial role in erection, orgasm and ejaculation.

The ascending of the Kidneys and descending of the Heart in the menstrual and sexual sphere is also ensured by the communication between the Du Mai and the Ren Mai: in fact, both these extraordinary vessels originate from the space between the Kidneys, both flow through the Uterus (in men through the prostate) and both flow through the heart. The Du Mai and Ren Mai form like a closed circuit and may be looked upon as one channel, one Yang, the other Yin. The Du Mai represents the Kidney-Yang and the Ren Mai the Kidney-Yin in the fluctuation of Yin and Yang during the menstrual cycle: the proper communication between Heart and Kidneys and between the Du and Ren Mai ensures a normal menstruation/ovulation and normal sexual function.

If the Minister Fire within the Kidneys is deficient there will be a decreased libido in both men and women and an inability to reach an orgasm in women and impotence in men. If Heart-Qi and Heart-Blood are deficient or not descending to communicate with the Kidneys, there may be impotence or premature ejaculation in men and inability to reach an orgasm in women even in the presence of sexual arousal.

Arouse Power was formulated to tonify the Kidneys and the Minister Fire so as to stimulate sexual desire, and to tonify Heart-Qi and establish its communication with the Kidneys. The communication between the Kidney and Heart and the connection between Du and Ren Mai promoted by this formula will also act on the menstrual function regulating menstruation and ovulation.

Mental-Emotional Pattern
This formula acts on the Zhi of the Kidneys and the Shen of the Heart. It is designed to promote the communication and mutual nourishment between the Heart and the Kidneys. To understand this formula, we must look at a different 5-Element diagram that the circular one of the Sheng cycle (Wood nourishes Fire, Fire nourishes Earth, etc.). We must visualize a cross-like 5- Element diagram with the Water at the bottom (North), Fire at the top (South), Wood on the left (East), Metal on the right (West) and the Earth in the centre.

In this view of the 5 Elements, Fire and Water (and therefore Heart and Kidneys) com- municate with each other and nourish each other: Fire descends to meet the Water and Water rises to meet Fire (each contrary to their normal movements as Fire normally rises and Water descends). The communication and mutual nourishment of Heart and Kidneys has many clinical applications and an important one is in the field of mental-emotional life. The Heart houses Shen and the Kidneys Zhi. Zhi may refer to distinct aspects: one is memory, the other is will-power. The second one is clinically more important.

If the Kidneys are depleted and the Will-Power weakened, the person will lack drive and initiative, will be easily discouraged and swayed from his or her aims. A deficiency of the Kidneys and Will-Power is an important aspect of chronic depression.